Home Flashfiction The Song On the Wind 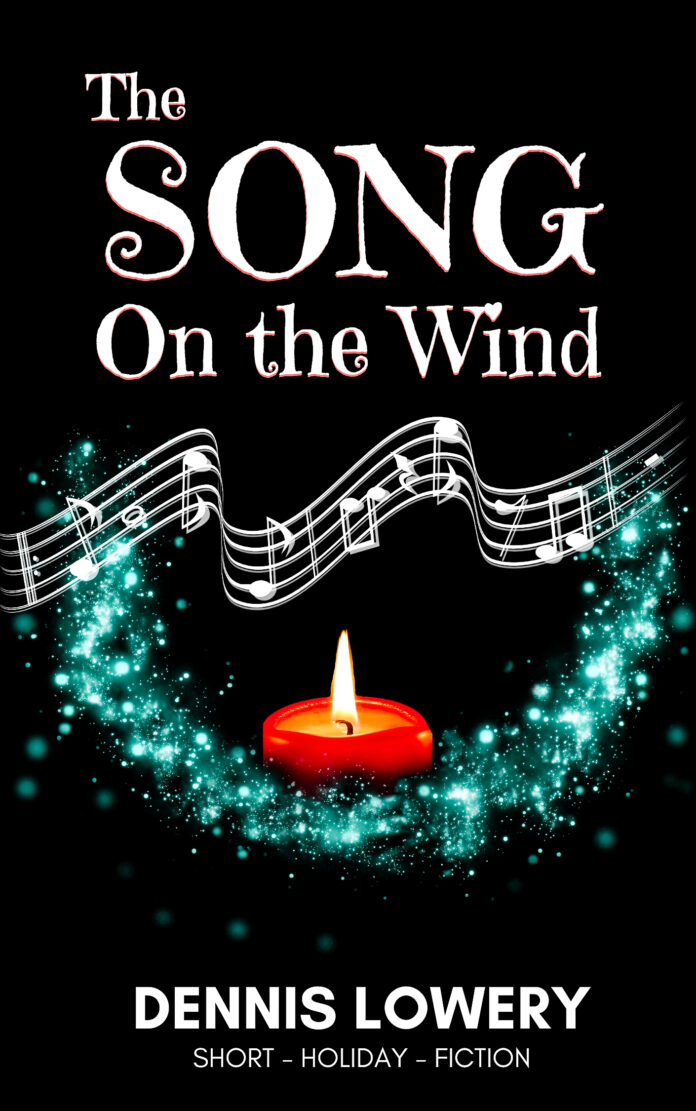 “Dennis, it doesn’t matter what you are writing about, your descriptions of the scene or the feelings inside a character, the reader feels like they are there watching it all unfold before them. Everything is so vivid. Thank you for this sweet story.” -Janet Mix

“What a beautiful story and music to share with us. Great way to start the day with a smile.” -Kathy Rosson

“I enjoyed the story very much, have always loved the song.” -Karen Gross

“Cute story. You have a way with words. Merry Christmas!!” -Dave Hendrickson

“Most of all, I remember looking out the window as I shifted around on the seat, clutching my purse and glancing up to make sure my bag was still on the rack above me. The station and buildings nearby were decorated and dressed in lights of silver, blue, gold, red, and green. As the train pulled out, they reflected off and in the glass flickering by in a kaleidoscope of holiday colors. When the wheels turned, I took two deep breaths. A feeling of certainty I was making the right decision came over me.

“Soon the train was outside the city and picked up speed. The view dimmed to gray with a lighter blur as we passed snow piled high in places along the track. Occasionally, color flashed from trees with their brown limbs thick with green pine needles powdered and sprinkled white. I saw country houses, too. My view of them grew slowly when the tracks curved toward them in the distance. As I got closer, they would suddenly fly past; a smear of more color on the frosty pane clouded by my breath on the cold glass. I liked it most when the train slowed at a crossing, and the flakes drifted down–a slower dance–and that sensation of getting to where I was going when the train went faster again.

“I hadn’t traveled much. Actually, not at all until I surprised everyone by taking a job in the city. My parents went nowhere, not even on vacations, and had never been big on celebrating the season, but Tom’s were. He and I met the year before. Both of us had been stuck working through the holidays. I was young, new to the city, and happened to take my lunch breaks the same time he did. Idle comments–nervous ones from me–led to conversations. I learned he was only a couple of years older than me and could tell how much he missed being with his family by the wistfulness in how he spoke.

“As winter passed into spring, summer, and fall… we fell more in love. As the next holiday season approached, we decided I would meet him at his parent’s and spend the day before Christmas Eve through New Years with them.

“I had grown up shy, but being with Tom made me discover confidence I didn’t realize was there. Still, I wasn’t always comfortable around people I didn’t know, so that Christmas would be very different for me. Full of anxious anticipation, I looked forward to being with Tom even if it meant among a bunch of strangers.

“Since then–and maybe it started with that trip–I’ve learned how much you can change the way things are, the way things once were, into what they become, if something triggers it. Even if it’s only small… that makes you realize your happiness is determined by what’s in you and not from others. But back then, I was still learning about myself and life.

“Bells rang, sharp and crisp in the cold night air. They were lovely, so pure and clear, not smothered by the sounds of a city that never slept. A girl of the suburbs and city life who had never known the quiet of small towns and the country, as the train I’d been on pulled away and its sound receded, I listened to them in the stillness.

“Night had fallen, but there was enough light from the streetlight on the corner to see the flakes of snow, making their slow way to the ground adding to the drift in the lee of the concrete base of the bench I sat upon. The wind couldn’t catch it there and cast it away. The small pile was a landscape of its own; I saw a mountain slope topped with bare, gray, stone. Then a bed of white snowflake-crafted linen flowed from shadow into the light with only a glint showing it was not fabric. It ended at the heels of my scuffed boots.

“It was a moment of self-reflection I’d never experienced. I felt it… the cold that came around edges of the framework of who I really was inside. Though 20 years old, I still had a scared child’s fear of the unknown. I loved Tom but had never traveled so far alone and soon would be surrounded by people I had never met. I shivered as the wind picked up and wished I’d worn a scarf as the icy gust feathered my hair and peeked down the collar of my jacket. I tried to smooth my long hair as I rose to go inside to wait for Tom to pick me up. I checked my watch; he should be along shortly.

“Then the wind carried more than the sound of bells. Voices. I turned toward the singing and followed it around the corner of the station that faced a park and off to the right, the beginning of the town’s main street. As my train pulled in, I hadn’t noticed the glow of the small group of people holding candles near what appeared to be caves that peppered the snow-covered hills surrounding this small town and hugged the station and park on two sides. The plumes of their breath accompanied each verse. The music touched me, pushing aside the coldness of the current of air that brought it.

“I listened and was warmed by their voices and the song’s message. It made me think the things ahead in my life–ones I could never know would happen–though they might challenge me, could become blessings. It made me think of how the story of a baby boy, born to follow the path meant for him, had changed billions of lives over two thousand years. I’d not been raised religious, but in the words and beauty of the song, I found peace and hope for a purposeful life, too.

“I had bent to pick up my bag and turned to go inside, and there was Tom. A dusting of snowflakes sprinkled his dark, wavy hair, and his smile caught the light from the Christmas-ribboned lamppost above us. He lifted me, twirled, and gave me a quick kiss as he set me on my feet again.”

I turned from facing the back seat to glance at Tom sitting next to me. Much stouter and gray-haired–just like me–the lights of cars passing in the opposite direction shining through the windshield showed the lines on his face. I smiled at him and felt a touch on my shoulder. I looked back at Cassidy, my youngest granddaughter, who had leaned forward. Twelve years old and still full of questions, she had asked me to tell her about when her grandfather and I were young.

“I love how you tell stories–I want to be a writer like you–Grandma! So, that was your first Christmas with Grandpa?” She had just made her first trip to visit us in the country for the holidays since we had retired and looked so much like her mother, sitting next to her, had at her age.

At the stoplight, Tom turned to look at Cassidy. “But, there’s a part of it that’s about gifts, too.” He reached over, took my hand, and brought it up to kiss and hold to his cheek. “Your grandmother’s the best Christmas present I ever got!”

Only five miles to home. I looked at Tom and still saw the young man who had lifted and swung me on that train station platform decades ago. “What, honey?” I shifted on the seat to face her.

“The song… the one the people holding the candles were singing. Do you remember it?”

It was my daughter Cassidy who one December weekend morning—I think with Alpha and Beta in tow—asked: “Dad, have you heard this song?” I put down my writing pad and took her phone, turning it sideways to play the video. When the song video ended, I handed it back to her, “That’s beautiful!”

Now, my girl Cassidy has possibly the hugest, most loving heart of anyone I know (which she gets from her mother). I think her greatest reward is when she does something for others that touches them, makes them smile or happy. The song she had just introduced me to did. I went to Amazon Music and bought it, adding to our library. Then with the song playing softly on the Jambox Bluetooth speaker beside me, I set aside what I had been working on and wrote the story you just read, for Cassidy… and you, too. Following is the music video ‘Mary, Did You Know?’ by Pentatonix—with the scene of them holding candles and singing–that prompted me to write this story. If you’ve not heard it, you might like—or even love—it too.

Waiting for My Witch

There Was Something About Her