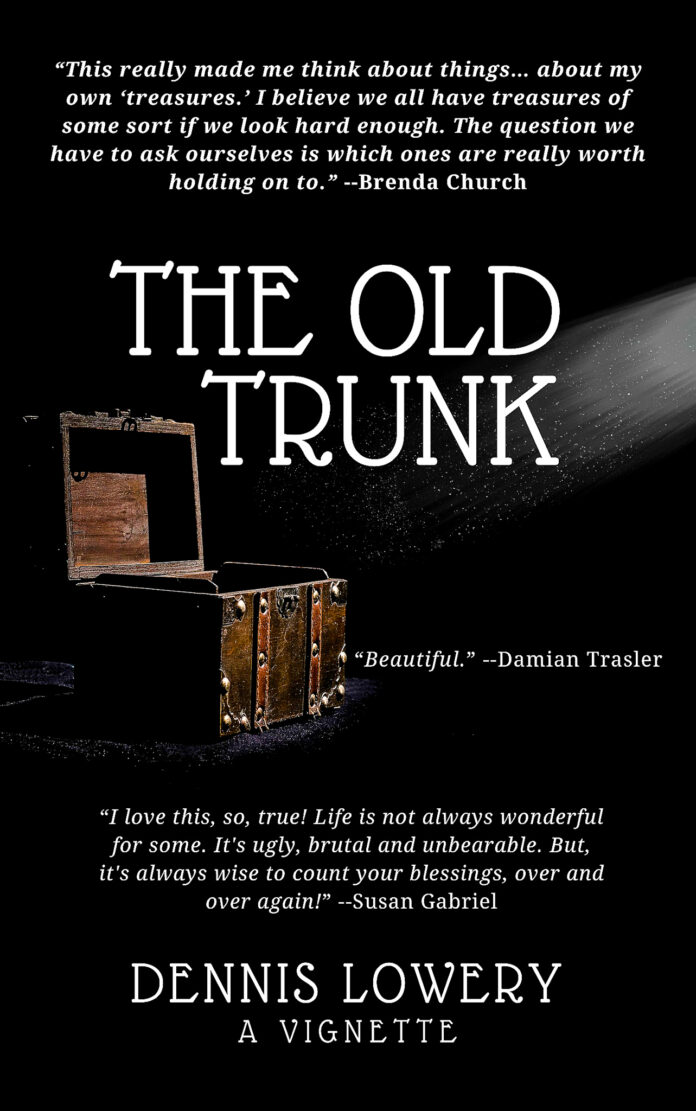 “Dennis, you amaze me once again! You’d think I’d be used to it by now, but every story is better than the last! Thanks for the great reads!” –Cristie Brewer

“This really made me think about things… about my own ‘treasures.’ I believe we all have treasures of some sort if we look hard enough. The question we have to ask ourselves is which ones are really worth holding on to.” –Brenda Church

“I found this piece of written wisdom to be touching and beautiful.” –Margie Casados

“A very enjoyable read and nicely put in words description of how we store away parts of life.” –Michael Koontz

“I love this, so, true! Life is not always wonderful for some. It’s ugly, brutal and unbearable. But, it’s always wise to count your blessings, over and over again!” –Susan Gabriel

“Life was as delicate as the paper held in her hand.”

The above is a line from one of my stories, and I remember the flashback memory I had when I wrote it. And how true it is.

In my early teens, one of my jobs was in an antique store. The owners bought things from estate sales all over, often in large lots, and sometimes wouldn’t know if it was trash or treasure until they received and went through piece by piece. One day, unloading a new batch of things they had brought in, I found an old trunk.

I needed something like that trunk and though old (don’t know how old) it was still sturdy with good hinges and even a lock with the key still in it. I asked the store owner if I could buy it or work off the purchase price if they didn’t want to keep it for resale. He checked it out and decided it was nothing special. All it had in it was old scrap newspapers. I think I bought it for $10 and worked an extra three or four hours to pay for it.

That evening, at home, as I cleaned it up and out, I saw the newspapers were from New Orleans, late 1918. The major news was still about the Armistice and the end of World War One. Wrapped inside a wad of newspaper, I found a young woman’s French passport and several letters to her written in French. I kept them, and two years later, when I studied French in high school, I brought them to my teacher, and she translated them. She had a hard time because they were on thin, brittle paper, and the ink had blotched and faded. They were love letters–talking of the future, of hopes and dreams–from a French soldier to the woman he loved, the last dated 30 October 1918. On that letter’s envelope, someone had written, so harshly there were little stabs and tears in the paper: “Il ne reviendra jamais…”

When I wrote the line at the beginning, I flashed back to when I held those letters in my hand. Someone had written them out of love. And the slashing comment on the envelope was made in bitterness… in pain. But they couldn’t bear to throw the letters away. Maybe part of them couldn’t give up their love for the man. Though the man was lost, they couldn’t leave them and their passion behind. Perhaps over the years, they took them out and remembered him. Or possibly not… maybe they were merely something that ‘was’ but no longer ‘is’… stored in an old trunk.

Over the years, I’ve often thought about what I found that day, and what I learned from it. And when I reflect on my life, I think about all the things I have stored in my ‘old trunk.’

As with most people, there are many memories. Bits and pieces, large and small, of a life full of experiences, bad and good.

Down deep are pain, tragic death, misfortune, opportunities squandered or lost, misplaced love or sad facsimile because I’d yet to discover true love. And worst is the acidic anger I once carried and let affect me. Those are the dusty, faded, cobwebby things at the bottom I rarely take out. Never to dislodge from their resting place, but still part of what made me who I am.

Above that is the good stuff: joyful experiences; things I did right, true love found and a more even-keeled temperament.

And on top, the things—the riches—I take out to cherish that renew me and give me strength. What I’ve accomplished and know I can accomplish. Memories and moments. Thoughts of my wife, daughters, and appreciation for a life well-built despite all the poorer things at the bottom of the trunk.

I think about those letters I found decades ago in that old trunk; the love, loss, and pain they signify. They taught me a lesson about appreciation and that there are so many things for which I’m very thankful.