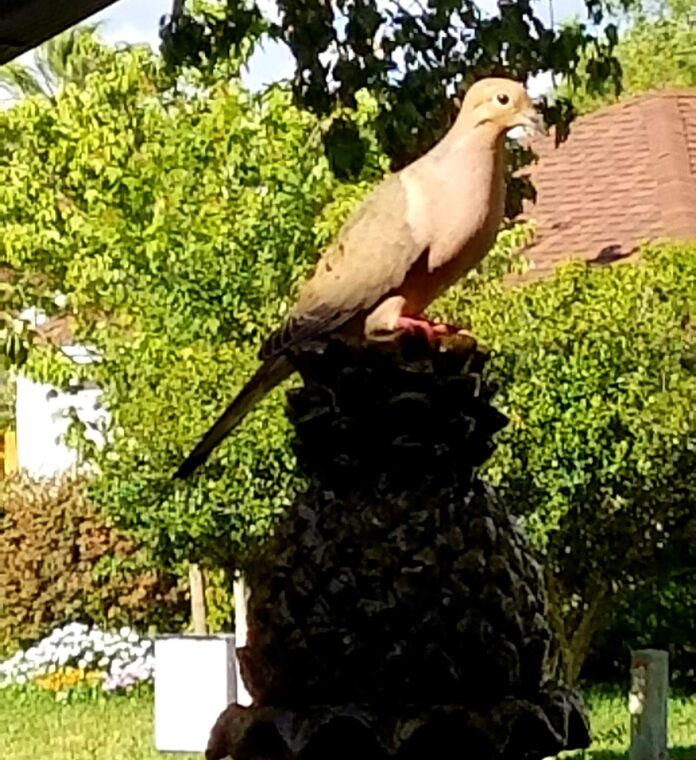 Some of you have read the following. After Awakening is another day… another morning:

I sit facing the sun. At first, the sky blushes with pride in its beauty to come and then prouder still, it brightens. Its rise now two hours old… the sun feels warm—good—on my upturned face. A slight breeze teases the pine needles in the towering tree I see profiled against the bluing sky. The wind caresses my face, adding to the feeling of warmth as it ebbs. I feel life moving through and around me. To my left and above, I hear the Doppler sound of geese, perhaps landing or taking off from one of the nearby ponds. I listen to birds warbling. I don’t know what kind. The honks of the geese, my favorite morning sound, the chirps, and melodious buzzes coming from the surrounding brush and trees… all are music to me and beautiful.

I’m reading from John Steinbeck’s The Pearl. But it now rests face-down on my lap. I’d just read of Kino’s perfect morning and must set his aside to enjoy my own. I take a deep breath, and though my day began three hours ago, in the pre-dawn darkness, our day is here. Behind me, inside the house, rises the sound of my two dogs and soon, my daughters and wife. The Song of Family and the call to be with them.

“The invariable mark of wisdom is to see the miraculous in the common.” ― Emerson

Another morning… another moment to appreciate…

Some of you might recall the above piece–Awakening–from a few years ago. It came to mind, and I’ve reshared because, for the past month, I’ve noticed something that bears appreciating even amid the human tragedy, economic and social impact of the pandemic. I hope you have observed or experienced it—or something similar—too.

The music of birds has increased in my small part of the vast world. Their calls and cries (a seeming good—welcoming—kind) are more plentiful and constant; fewer cut off or that abruptly end. Their melody is sustained. And the ends of the stage it comes from—just beyond our eastward facing backyard fence bordering a copse of woods—have curved toward me. Forming an arc that now includes backup singers in the trees of our side yards.

This morning—before this writing—brought a new accompaniment. And though we have birds frequent an alternate stage in our front yard, it’s the first time I’ve seen this performer. One I didn’t recognize, having not seen any in the 25 years since building our home. A male Mourning Dove handsomely perched atop the fountain in our front yard, in the sunlight beginning to slant over our rooftop. Grayish-brown with a long tail, and black spots on folded wings. A pale blue orbital ring around each eye, and a splash of iridescent light pink at the neck that caught and shone in the sun. First watching him through a window, I stepped out hoping—not expecting—he would stay long enough for a better picture. He did.

In the soft wind, and to the low burble of the water… I heard his mournful call: “cooOOoo-woo-woo-woooo.” I watched him watch me. After a moment, he took flight with a distinctive warbling, almost whistling sound. As I write this—now sitting in my backyard with my writing assistant—I’ve looked up the bird. And learned the sound I thought came from his throat— sonation—comes from the speed of its beating wings upon takeoff and landing. The Mourning Dove can fly up to speeds of 55 mph.

Sadly, I watched him go. A trajectory taking him higher and over my neighbor’s house. I hoped he would return, and I believe he might. Beta mentioned seeing what she thought was a pigeon on our fountain a few days ago. So perhaps I’ll enjoy the meeting and the moment again. But if that never happens, I know I’ll remember him. There’s a—purportedly—Chinese proverb: “The palest ink is better than the best memory.” And if you’ve read much of my writing, you know how strongly I believe that’s true with what I’ve recorded from my own experiences. I’m glad to have done so.

“Now, remember: they’re not for eating, but for listening, because you’ll often be hungry for sounds as well as food. Here are street noises at night, train whistles from a long way off, dry leaves burning, busy department stores, crunching toast, creaking bedsprings, and of course, all kinds of laughter. There’s a little of each, and in far off, lonely places, I think you will be glad to have them.” ―Norton Juster, The Phantom Tollbooth

Now the sun is rising higher, the day is warming. Murphy—parked in the shadow of a sago palm—has his nose up into the morning breeze that’s fading. He rises, looks at the shrinking shade, and turns toward me. I glance down at the patio table, my tablet, and the wrapped bar next to it. When your dark chocolate—the three squares I allow myself with morning coffee—melts… it’s a sign. Time to go inside. And just as Kino in Steinbeck’s story appreciated, I hear ‘the Song of Family and the call to be with them.’