Home Fiction The Boy Who Got Away 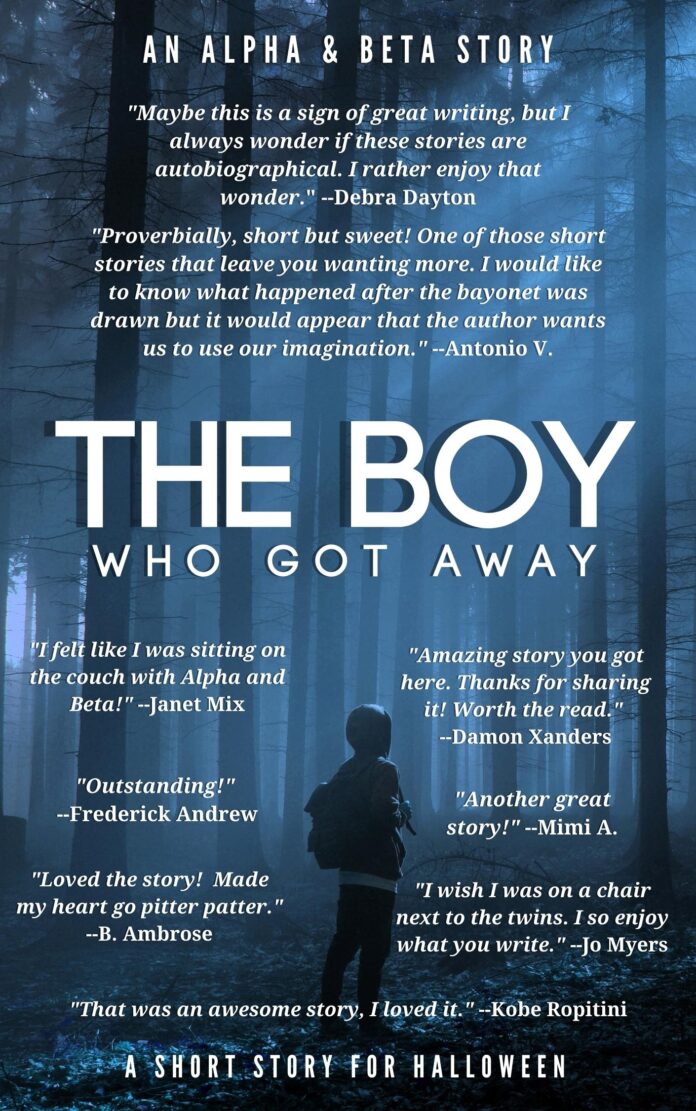 Sunday mornings after chores, my two youngest daughters and I usually picked out a scary movie or maybe a science-fiction classic to watch. But for a period, it was Supernatural, a series I didn’t know but had something like 15 seasons. Binge-watching bounty. On the show, Sam and Dean, the Winchester brothers, hunted and killed all kinds of ghosts, demons, and paranormal thingies. The series draws on myth and urban legend as the basis of the storylines. I enjoyed it as much as Alpha and Beta [my then 14-year-old twin daughters, not their actual names]. I worked on story notes one late October Sunday while they watched the series.

I looked over at Alpha. “Yeah, honey.” It’s funny with twins. They often ask questions they seem to have reached a consensus on through some nonverbal means of communication. I looked up from my notepad to see them glance at each other and nod their heads like, ‘Go ahead, ask him.’

“Do you believe in…” Alpha used the remote control to point at the TV and pause the show, “ghosts and demons?”

I put my mechanical pencil down [at that time, I handwrote story and scene notes with a Staedtler Graphite 771 or a Faber Castell Pearwood E-motion, now I use a reMarkable 2 eInk device]. Then set my lap desk on the Ottoman by my chair. I turned to them both. “You know about what happened to me in Italy?” [Which I’ve told in another story.]

Alpha nodded her head. Beta asked me, “But what about when you were a kid?”

“I can tell you about a boy and what happened to him. Want to hear?” They nodded, so I told them (improvising it as I went):

“He was always happiest outside and on his own. His family lived, barely above the poverty line, in the country on thirty acres of land. About two-thirds forest, the rest pasture, and a dying pond. It seemed all he did was work; there were always things to fix or repair when everything’s held together with baling wire, tape, and a prayer it lasted until money came in. When he had free time, late in the day, he would stuff a canteen of water (sometimes a can of Coke), a bag of beef jerky, a book, and a flashlight to read by once the sun started setting into a small backpack and disappear into a remote corner of the woods.

“One Halloween, he was in the farthest part where his family’s land ended and sloped toward the road leading to what he and his friends called The Point, but was Grey’s Landing on the lake.

“The sun was setting, and through clear patches, he could view the moon rising low in the sky behind the trees. Their tops rustled and moved in the crisp, chill wind that bent them away from the direction of home. He shined his light on his wristwatch. Seeing the time, he rose from the knee-high stump he’d been sitting on and headed that way along the path. As he stood, stretching and brushing off the seat of his pants, behind him came a baying. An ululation that stabbed the night [I had to stop to explain to Alpha and Beta what that word meant]. A call strong enough to beat through the wind’s gasp that flowed around tree trunks and through leaves to reach him. The beast’s lament, colder than the falling night air, sent shivers through him.

“The boy was halfway out of the woods when a second, closer howl came, accompanied by the sound of gnashing teeth and chattering of fangs. Now he ran through a dry autumn forest; sticks and branches snapped and cracked as he made his way. Ahead, a wail flowed down to him, followed by a third shriek behind him. Whatever they were, he realized they were working together. He angled to his left off the trail, hoping to lose what hunted him, now running fast. Hitting limbs that didn’t break but snagged the hood of his sweater and tore long gashes in his face and neck, his forearms protected by long sleeves. His hands became scored and cut, trying to protect his face. Blood flowed in streaks.

“Gasping, the boy gripped a tree for a moment’s pause, hanging on to catch his breath. He ran on at the caterwaul behind him [had to stop and explain that word too] of beasts close on the scent of their prey.

“Clouds were building, and the wind picked up as he broke through onto the crest where trees ended and the pits began. Broad swaths of excavation and deep gouges made in the pasture; the source of fill dirt his father sold to local construction companies. He had to go down into and through them before the climb back up for the open stretch to his home.

“He sprinted, his lungs straining and heart pounding louder than the wind. There were no more cries as he slowed to listen. Off the upward slope that plateaued, he passed the set of gnarled pear trees atop the rise overlooking the pond. Only 1000 yards down, then up again to his home, sitting on the next hill. His thigh muscles twitched and jumped, and his gait became choppy. The impact of his feet as he planted them, a flat-footed, jarring jolt with each stride and a near-puke feeling in his throat. With leaden arms he could barely lift, he spat to the side and looked up at the house back-lit by the last blood-orange remnants of sundown. He could make it.

“Halfway there, he felt something almost on him. The snarl so close he smelled rank, rotted-meat breath. He looked over his shoulder. Its yellow eyes widened, and long teeth glinted in the moonlight as a taloned hand, thick with coarse black hair, reached for him. Claws dug into his flesh and turned him. Spun to the ground, a spray of saliva hit his face as the howl climbed to a scream. He rolled and got to his feet; his sweater and shirt ripped from his back. In his hand was the WWII-era Oneida M1905 bayonet he had bought at a flea market and always carried into the woods. Just then, a sheet of icy rain swept over them….”

My daughters’ eyes had grown wide as I told the story. They became larger still when I stopped talking and waited.

“Dad…” they finally blinked, “what happens next? Did the boy die?”

I said nothing, leaned toward them, and pulled my t-shirt down, showing them my right shoulder and the scar that ran across it. “He got away.”

As a father, I’ve learned to keep my girls on their toes over the years. And I got away long ago… from where I was to undertake a transformative journey that led to love… and to my family.

Give a listen to the following music video, a centuries-old song about transformation… and love.