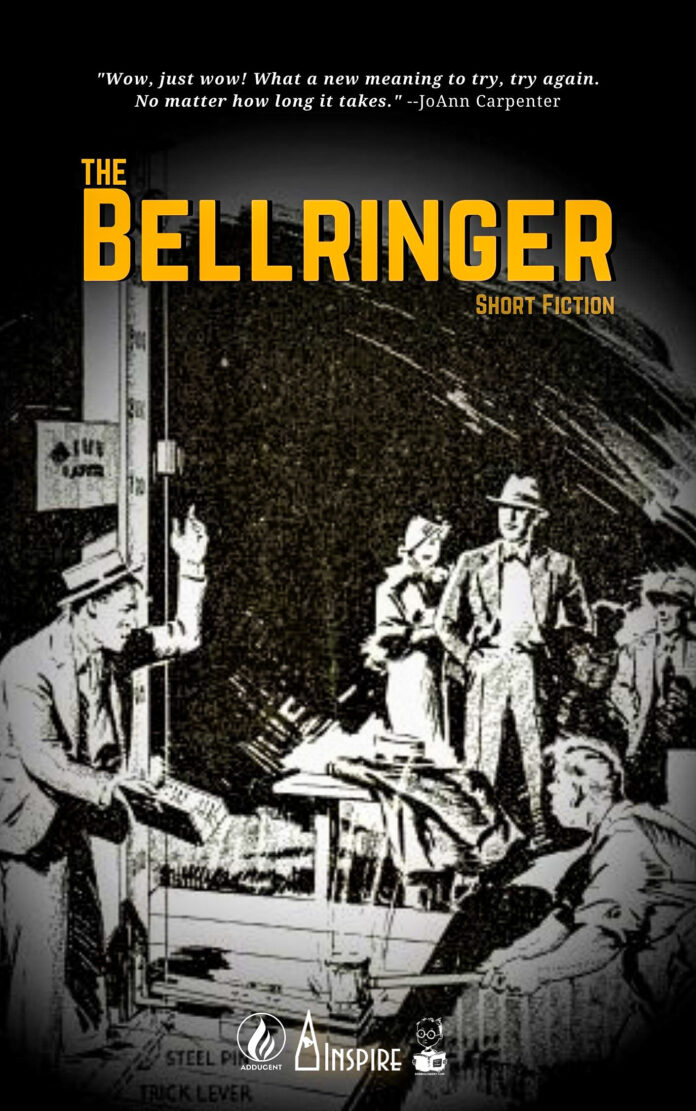 The Story Behind the Story: I interviewed an entrepreneur who had started a company—running it while working full time—that grew from zero to $200+ million in revenue in a handful of years. He didn’t have a fancy formal education and had been raised in borderline poverty. No real foundation. But he had what I—and he—believe is the most critical trait for success. I finished the interviews with him (for his ‘success’ chapter in one of my ghostwriting projects). And something he had mentioned stuck with me. It became this short story (about that success trait). I knocked it out quickly, and he loved it. Others have too.

“Such a good read. Loved it. Dennis, you are amazing.” -Jo Myer

“Wow just wow! What a new meaning to try, try again. No matter how long it takes.”-JoAnn Carpenter

“Love this. Your words, the mix of them and all they hold…warm my heart and make my day.”-Dawn Jackson

The old man slowed the rocker when he heard the steps come onto the wooden-floored porch. His eyesight was failing, but the hearing was still as sharp as ever. Those boards—their sounds when trod on—announced his great-grandchildren. “Alice… and Jimmy, you came to visit grandpa!” He opened his arms, knowing they’d fill them with a hug. “What are you rascals up to today?” The hugging done, he shifted and leaned forward.

“Mom’s taking grandma and big-granny to their doctor’s appointments.” Alice had pulled one of the other chairs closer.

He focused on her; now 13-years-old, sharp-chinned with jawline more distinct since losing her childhood fat, blonde hair haloed by the morning sunlight slanting in behind her. A scraping, sliding sound told him Jimmy was moving his favorite perch—a still sturdy old trunk with stout hinged top, now used as a porch coffee table—next to his chair. He always liked to sit eye-to-eye with his big-grandpa. Four years younger than Alice, he was still round-faced under a mop of brown hair that never stayed combed for long. “Mom said we could stay with you.” The boy’s smile stretched and tightened, taking away some softness in his features.

His great-grandkids company was a gift he never took for granted. Each minute with them was a blessing. “So, afterward… when your mom brings your big-granny back… what are you going to do?”

Alice leaned back in her chair. “We’re going to a fair this afternoon.”

Jimmy tugged at his shoulder, “Mom says they have clowns and rides! Have you ever been to one, grandpa?”

He could hear the excitement and anticipation in the boy’s voice. “Yes, but a long time ago.”

“Tell us a story about one!” Jimmy bounced on the trunk—getting too big to do without risk of breaking it—making its top creak.

He looked over at Alice. “You’re not too grown-up; are you… to listen to one of my stories?”

“Never grandpa,” she smiled at him.

“Okay. Here’s one you might like; it means a lot … even still today.” He drank the last of his coffee and with a twinge in his back, bent over and set the empty cup between his feet and began. “Once there was a boy in his early teens the year a carnival came to the small town where he lived. Excited at the chance for a new experience, he went. He’d never been to a fair before. Exploring all the sights and sounds, he followed the flow of the crowd and came across one of the fair’s pitchmen.” He broke from the story to explain to them: “That’s a man who tried to get you to do things that took money from your pocket and put in his.” He continued, “The boy stood listening and watching the pitchman work the crowd: ‘Heya, heya… who’s a strong man? Who can ring the bell and win a prize?!’ The pitchman wearing a red-banded straw boater tilted back on his head called out to passersby and gestured at the contraption behind him. ‘All you gotta do is take this here hammer…’ he held up a giant wooden mallet, a 15-pound rubber head on a four-foot handle. ‘And smack this,’ he pointed at a circular pad at one end of a see-saw board. At the other end was a square metal puck that would be catapulted along a cable in a channel inset in a wooden frame rising vertically 10 feet to a bell at the top. ‘If yer a strong man, ya ring the bell!’ Along the channel were markers titled ‘Weakling’ about a foot from the bottom to ‘Strongman’ just underneath the bell. And at that highest level was also the words ‘You Win a Prize!’

“The boy stopped as two teens older than him, and a middle-aged man tried without success. He reached into his pocket for one of the two coins he had left from his earnings for the week. The boy paid his 25 cents and took a swing. The mallet was unwieldy, and his handling awkward. He only half-hit the pad, and the puck barely moved. ‘Better luck next time, kid,’ said the pitchman already looking for the next 25 cents. Several more, young and old, tried. A few did as poorly as he had. A couple whacked hard enough to send the metal puck halfway, and one stout man slammed it to a foot short of the bell. Needing to save his one remaining coin, the boy moved on to other things to do that did not come with a cost.

“A year later the carnival came to town again, and he went opening evening. He had thought little about the strongman test, but when he came upon it, he recalled his first experience. Now, the boy was a year older, and through the manual labor of his chores and earning money working for others… he’d grown stronger. Times were hard for him and his family, but he handed the coin to the same pitchman from a year ago and stepped up. This time his grip was surer—more certain—and his swing smoother. His strike landed squarely on the pad, but the puck only jumped about four feet. ‘Better luck next time kid.’ The pitchman took the mallet and handed to a man—not much bigger than the boy—in blue, worn but well-patched overalls, who, with no hesitation struck the pad and reached about two-thirds up. Shaking his head the man gave the mallet back and stepped off to the side next to the boy.

“Several other men tried, and all failed, and the boy had the first inkling it—this strongman test—was rigged so no one could win. He couldn’t see how to get the prize, whatever it might be. Next to him, the man in the overalls shifted feet in scuffed boots and dug into his pocket. ‘I’ll give ‘er another try.’ He flipped the coin to the pitchman. Picking up the mallet, he stepped back clear of anyone around him and swung back and forth like a baseball player warming up, stretching before standing over home plate to face a pitch. After a minute, mallet in one large hand hanging rubber head down at his side, he approached the pad. Up and over his shoulder in one motion without hesitation, he brought the mallet crashing down squarely. The metal puck shot like a rocket all the way to top. The bell rang—a deep tone—that made the wooden frame vibrate and the boy standing beside, felt it. ‘We got a strong man!’ the pitchman crowed, knowing it would bring others. Most would fail.

“The boy thought about what he’d seen and moved on.

“Another year went by, and the carnival returned to town. The boy was there the minute they opened. Everything was set up as before, and he went straight to it. Along with his work since the last fair, he’d added training. He’d chopped more wood than Carter’s got liver pills.” The old man blinked; he knew it not likely Alice and Jimmy would understand the reference but kept going.

“Older and stronger, the boy paid his money to get his shot. The man in the patched blue overalls wasn’t there but was on the boy’s mind as he stepped up. He’d seen the man try and fail. Then attempt again and succeed. That’s all he needed… the belief it could be done. He looked around at the people stopping by to watch. He knew many of them. Ten seconds later the bell rang. A far deeper, more melodic gong than the year before because he’d made it happen. Everything’s different when you witness something difficult—maybe that seems impossible—get done that you want to do too. And then you do it. The boy kept the mallet and dug out another coin for the pitchman. Soon that bell not only rang, it jumped as the speeding metal puck struck it. ‘Never had someone do it twice in a row,’ the pitchman shook his head as he handed two prizes to the boy. ‘You’re a real bell ringer, kid.’ Several in the crowd clapped and congratulated him. And from that day forward the people in the little town—who saw him try and fail, try again and succeed in many things—called him, ‘The Bellringer.’“

The old man stopped talking and sat back.

“What happened to the boy?” Jimmy asked.

Worried, his old man’s tale had bored her; he looked at Alice. She was still smiling and nodded. “Yeah, grandpa… what about the boy afterward?”

“Jimmy, hop down,” he tapped the trunk. “Help me lift this,” he got age-gnarled stiff fingers under the edge of the lid and lifted. The boy helped with the other end. It opened with a protest, a rusty unused-hinge squeak. “Let me see…” he dug around shifting the contents. “There.” He reached deeper and brought them out. He handed the stuffed horse to Alice and the bear to Jimmy.

Alice held it up and turned around. On the horse’s side was crudely stitched: ‘The Bellringer.’

“Hey, mine has it, too!” Jimmy’s showed the same rough-sewn lettering.

The old man grinned—carefully, his damn dentures wanted to come loose—then reached to trace the stitching on Jimmy’s bear. “Your great-great-grandma added that to them.”

“Grandpa, you were the bellringer!” Alice clapped her hands and slid from her chair to hug his neck. Jimmy laughed, and he joined him.

“That I was… that I was. You know…” he straightened and put a hand on each of his great-grandchildren’s shoulder, “I’ve learned in life you can do a lot… if you can see your way and believe in yourself.” He drew them to him wrapping them with a memory of once strong arms. “And I want you to know, I believe in you, too.”

They hugged him back and it filled his heart.