Home Every Picture Tells a Story The Bargains Below 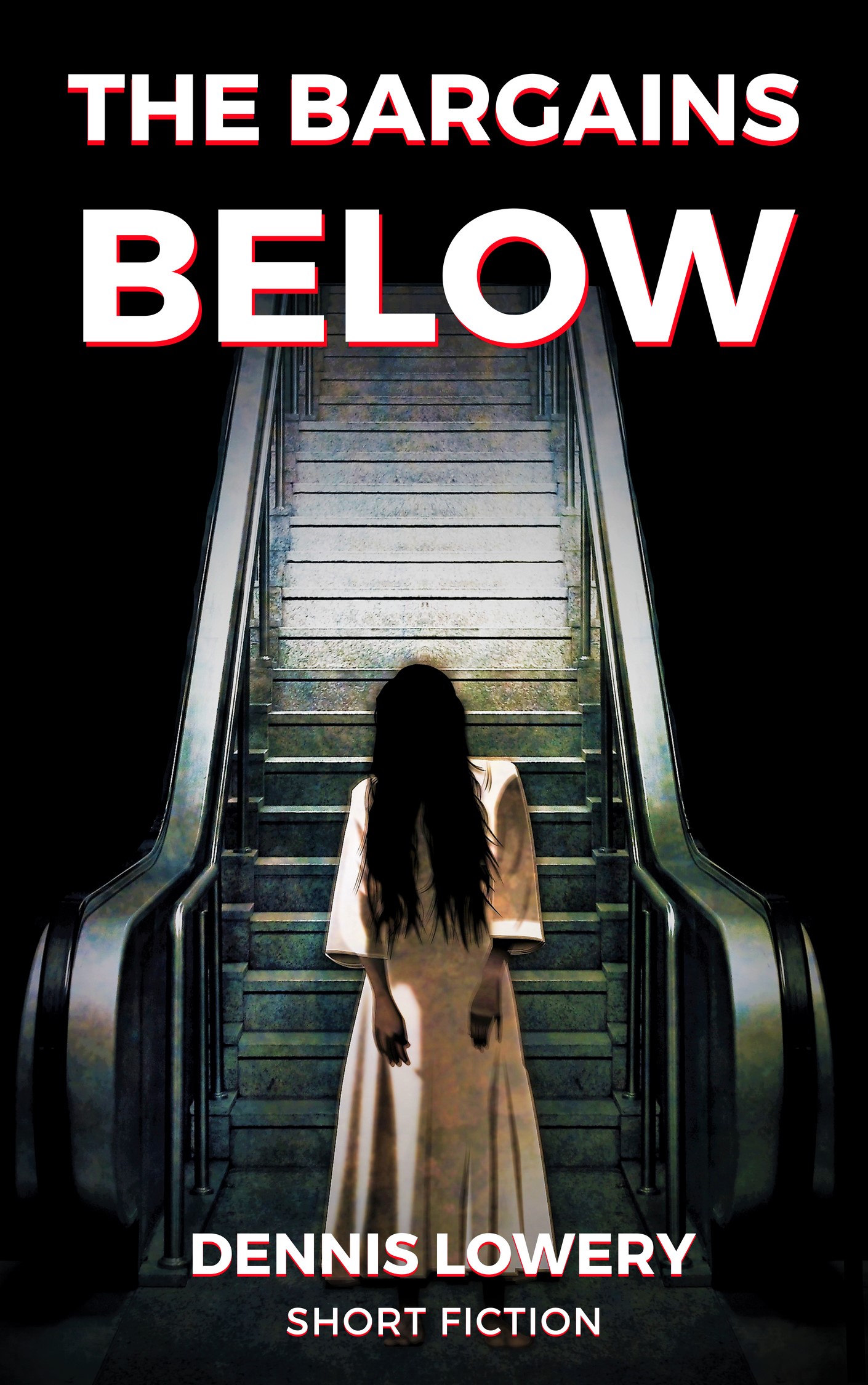 The savings were worth the crowds, Laurie Pace rationalized as she entered the mall from the second level of the parking garage. Shoppers moved about, some solo, some with friends or husbands loaded with bags and frowns. Just a bit of shopping, checking out the sales, grab some new books to read, and then she looked forward to unloading the U-Haul with Sam, so she could prepare for the holidays.

New to town, she was surprised at finding a mall in such a rural setting, located just the other side of an extensive memorial park—called Winding Grove or something—that formed an arched border for the small town. Maybe the Native American casino, located the next county over, had something to do with it. As she made one circuit of the second floor, she came around to the single escalator down. Floating on two red balloons—tied at the upper corners—rising from the well of the escalator was a sign done in bold lettering that said: The Best Bargains are Below.

Laurie looked around at the other shoppers moving past her or stepping onto the up escalator. Glancing below, where the balloons had launched, she saw a swirl of colors. As if somewhere down there, close enough for its lights to reach, a carousel-mounted Kaleidoscope projector showered the space with color. The sound from it was distinct enough to give the sense someone—more shoppers, maybe—was having a great time. The feeling came over her; how she felt when finding something on sale, she wanted. A dopamine-fueled tingle that power-shopping always gave her.

She checked it out. As the ride down went on and on, it grew darker, and an eddying drift of cold air prickled the flesh on her arms that gripped the rails. Gray light showed, coming to the first floor, she thought. As she went out of the dark and into the pale light, she saw someone ahead. The ankle-length dress, a stained-ivory color, and long black hair that shrouded the lighter oval of a face told her the figure was a young lady, maybe in her late teens or early 20s.

The girl—Frida on her askew nametag—smiled glossily, the red lipstick prominent against her pallid skin. As her smile broadened, the lights behind her bloomed, showing a bright corridor leading to an open—festive—area filled with the bustle of consumers. “Welcome to the Super Shoppers’ area, this floor is where you’ll find the best bargains.” The girl said, looking at her through a drape of dark hair.

She has kind of a goth thing going on, Laurie thought, but then some people were into Halloween and never moved on like those folks who leave their Christmas tree up well into January. “What kind of markdowns?” Laurie asked, relaxing a little but also perking up with anticipation of the sales.

“Oh,” Frida’s eyes widened, “very deep… everything has been slashed.” A white arm raised, and she beckoned, “Please, follow me.”

Halfway down the connecting passageway, Laurie glanced back to see the darkness—a bank of lights shut down in series, marching into total black—had closed in behind them. Gesturing over her shoulder, “Something is wrong with your lights.” Not replying, the girl was a few steps ahead of her, walking into a now withering light. The chill’s bite deepened as Laurie paused, seeing her breath cloud as she called out, “I think I’ll come back later,” she turned.

“But we have things…” the girl walked back to her, “to die for!” She grabbed Laurie’s arm.

The girl squeezed harder, her fingertips had sharpened and dug in.

“Let go…” Laurie repeated, twisted, then staggered as the girl yanked her forward, low heels sliding on the smooth concrete.

“We all chop down here!” Frida’s voice cleaved like a butcher’s blade through bone. Behind her, the once cheerful noises had morphed into a food court’s ugly cacophony

“Let…,” Laurie managed with one hand to reach into her purse for anything sharp, she found a solid rectangle with an edge, “me go, bitch!” Clutching the plastic in her fist, she swiped it at the girl’s forearm slicing into flesh that blackened with a whiff—a coil of smoke rising—from burning skin. The girl’s screech echoed, and her grip loosened. The herd-sound of a horde surging—as if after the last 4K 70-inch flat-screen for $800 off—filled the hallway. People, a lot of them, were coming their way. A rancid milk, loose bowels, and putrid flesh odor filled her nostrils. So strong that a puke thermometer-climbed inside her throat, a mouthful she choked back down. She slashed again. The girl—now a maniacal Renfield with garish white makeup and lips framing a bloody-toothed wound—released her with a ghoul’s shriek.

Laurie turned and ran into the dark, hands, and shoulders scraping the rough walls as she ricocheted back the way she had come. The stench and skin-crawl sensation that claws and jagged teeth were only a foot from her made the bile rise again in her throat. She spat it out. The tingle she had felt turned to tinkle that ran down her legs as she ran. She had lost one shoe, and then the other came loose… clop-clopping on the concrete, its beat matching the thud of her feet until it too kicked off and spun into the darkness ahead of her.

She looked up. Ahead and above was a lighted opening. She could barely see the steps of the down escalator, moving—moving—moving but carrying no one. To the left, she saw stairs. As she scrambled up them, she felt a hand grab the back of her jacket, long nails piercing it and blouse to find soft flesh. With a tearing and pinch-rip of skin, she pulled free and shot ahead of what shambled behind her. Unable to see anything, she climbed and climbed, a wall now sealing off the escalator. Looking back to see how close they were, she slammed into the concrete and metal covering that capped off the stairs. She turned to face downward. Below her, halfway up the stairs, was a cluster of Morlock eyes and pale faces full of hunger. Instead of a deal, she had found the undead. They had stopped just short of the opening to the escalator. Beneath them, on the steps, the concrete showed hardened crimson blotches. She had nowhere to go.

Panting, Laurie knew she had only one choice. Back down and then over the rail and onto the escalator, she must run up it. She looked at the thin piece of plastic in her hand. The girl’s flesh had burned and blackened at its touch. Holding it out–Lady Van Helsing with her religious icon—she went down the steps. Lips writhed and hissed from the dozen creatures below her. But they didn’t back away until she was two steps above them and almost even with the opening to the escalator. She thrust the fist-held plastic at them, and as they flinched, she stepped down and then drove off her left leg to sprawl over the separating rail and fall onto the escalator.

Facing downward, on knees and hands, it carried her back into the darkness below. And there, the gleam of eyes and teeth had grown. They waited for her. She pivoted to face up, got to her feet and ran. Legs pumping and heaving—fighting—up the descending steps.

With a bloodied head, shredded jacket and shirt, peed-in pants torn at the knees, and the remains of her breakfast on chin and chest, she staggered onto the second floor. None of the shoppers walking by stopped. “What kind of crazy Stephen-freaking-King town is this?” she screamed. No one looked at her. Turning, she spotted the sign—Parking Level II—with the arrow pointing the way. She followed it, wiping her face with her hands. She felt the buzz in her pocket half a second before hearing the ringtone. Smearing what had come from nose and mouth on her pants, she pulled her phone out. “Sam!”

“Don’t!” she cried. Looking at the black rectangle, she still carried in her other hand, coated with some greenish-red viscid mucus already drying on the plastic, covering the lower part of the Costco Executive Member Card. She’d need to get a new one.

“I’m not living in this town,” she ran toward her car, “and God as my witness, I’ll never go to a mall again.”

Minutes later, tires squealing she sped out of the garage on the access road to merge onto the highway. A bitter North wind had picked up strength and the trees—even the thick old-timers—lining the road bent and swayed. The gnarled limbs of the ancient oak shifted in the gusts revealing and then obscuring the lettering of the sign Laurie had seen earlier, for W I N D I G O G R O V E.

A Note from Dennis:

The Wendigo (or Windigo; it has several spellings) is an Algonquin legend of a cannibalistic monster purportedly created by the greed and selfishness of Man. They—usually the oldest of them in a region—can possess humans, turning them into monsters, too.

This little story–written based on the image I came across–is not an admonition against shopping. It’s a cautionary tale—one to keep in mind—if you’re somewhere new, unfamiliar, and someone or some sign says you’ll find what you want… below. Be careful, very careful, shoppers always looking for a better deal. It’s dangerous out there.