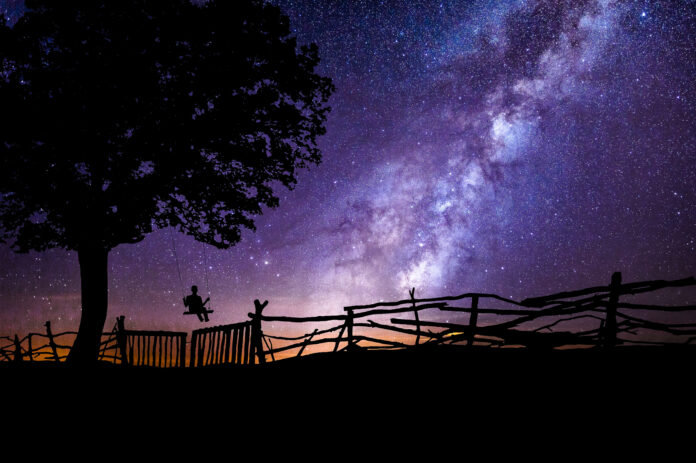 He was still young, but almost 18. Many—no, most—would say too old to swing like a child. But the motion soothed him; a subconscious sense he could change his perceptions with mere movement. A shifting of view that revealed more of the world… and himself. To see what was before him, inside him, differently. He had read a lot, and he noticed things. People. The way they were to themselves and to each other. And he thought he’d never fit in. Never be like them. Maybe a good thing… he thought so. But it also made him lonely. He hoped to find a place… somewhere in the world he had read about and liked… that felt right. Even if the story—its writer—had shaded it too kindly… showed it to the reader through tinted glasses and made everything seem beautiful. It was worth trying. Discovery and disappointment were two aspects of life he was not afraid of meeting and learning how to cope with.

He kicked his feet and pulled back with his arms—repeating the synchronized effort—to go higher.

The day ended under a cartwheel spread of pinpricks revealing the light found behind the sky. He thought how perfect the moment and wanted that for all of his life. But despite his youth, he wasn’t naïve. It can never be good all the time. But he would try.

Evenings like this made him think most. About how the band of sunset peach blended into a purpling twilight that darkened as the last light from the day had softened, settled, and given way to the night. About the stars that now glittered above a ramshackle fence that formed a boundary. Everything in his life—past, and for now, his present—was behind it. Everything he wanted… beyond.

God, how he wanted to leave. To be on his own. Soon he would.

But first, he would kiss Betty Ann Nichols tomorrow night at the Spring Dance. He wondered if her lips tasted as sweet as he thought. He hoped so.

I saw the picture above and in my mind’s eye appeared the far younger image of myself. Gazing at the night sky… the stars and moon. Wondering at all that’s in the world that fell beneath their light. Feeling an ache I could not define and a hurt that was too easy to identify. The things the young feel that fade with time and the old are glad they’ve put far behind them. But—for me—the wonder still lingers. No matter where I’ve gone… the things done… the marvel of life and our world, the curiosity remains.

There’s so much still to experience and enjoy. Even the repeated moments… the repeated motions. Murphy–my Irish Terrier–sitting beside me as I write. The pinch of the first sip of my iced-rock-glass of Bulleit (a good bourbon) with a touch of Schweppes.

The wind in the trees as I write sitting in my backyard looking up at the distant half-moon above the trees in a late afternoon robin’s egg sky… birds singing in the copse of woods just over the fence. The night’s fall and the glow of the new ‘moon’ wind chime my wife hung earlier in the day. The fading notes of Nina Simone singing ‘I Put A Spell On You.’

So much I relish no matter the frequency.

I’ll leave you with that and go kiss ‘Betty Ann.’