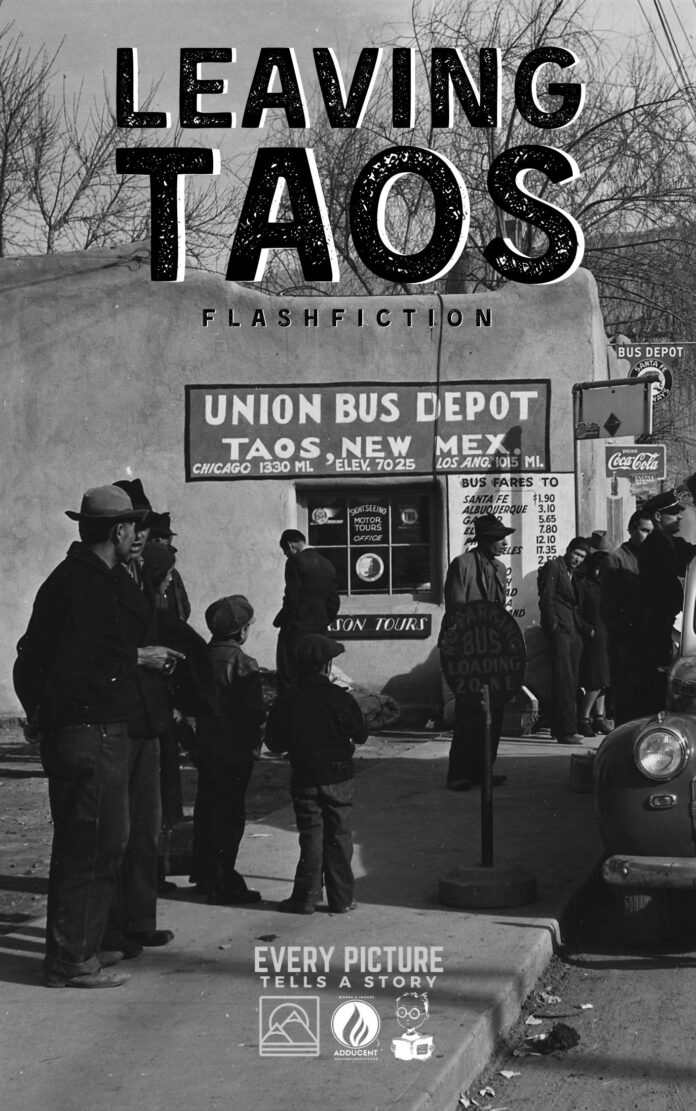 While looking through a collection of Depression Era public domain photos, one sparked some thoughts: What were the two men on the left talking about? And what about the man by the depot window with hunched shoulders, what’s up with him? That picture (used for the cover) became this flashfiction piece.

“Excellent. Loved the twist. You paint characters so well and with so few words, too.” –Vicki Tyley

“Really cool! Thanks for sharing!” –CN

“They think,” Henry nodded in the direction of the cop at the sidewalk checking a tarpaulin covered load, “the killer’s headed to Santa Fe.”

“Nah, I bet he went north.” Joe drew hard on his cigarette, taking the smoke deep then letting it out in plumes. “Folks on the radio are warning people to watch out… whoever he is, he’s a dangerous man.”

Henry shook his head slightly. Joe was one of those men who sounded, with dead-solid certainty, like he was right. But was always mostly wrong and sensationalized everything when he passed it on to others. “What makes you think it’s a man, Joe?” He wanted to wind him up a bit and see where he spun.

“Bud Carson’s my wife’s nephew… he works with Tom Flint’s cousin. Tom’s the deputy who found the man on Old Mill Road night before last, just as he rattled out his last breath. Tom told his cousin the killer caved the man’s ribs in—someone beat the shit out of him. And get this,” he took a last drag from the cigarette butt in his hand and flipped it to the ground, “the head had been twisted, so it was turned around near backward.” He shook his head. “The poor bastard was belly down but looking up when he died. Musta happened not long before Tom rolled up.” He pinched a piece of tobacco off his tongue and spat. “Ain’t no woman strong enough to do that.”

“You haven’t been here but a year, Joe. And haven’t seen Bill Stoudemire’s wife, Maggie, then.” Henry shook his head and winced, remembering his single date with her when they were young. “She’d go 200 pounds… and none of it fat.” He shuddered again at the thought of when he told her he wouldn’t go out with her again. “And she’s a mean bitch. That’s probably why Bill ran off a couple of years ago.” He looked thoughtful. “Maggie, she doesn’t come to town much… stays on her place east of town.”

“Well, I don’t think no woman could do it.” Joe turned away. “See you later.”

Henry watched him walk toward Mabel’s Diner and thought, Old Mill Road runs east-west… right by Maggie’s land. He let the idle thought slip away. It was time to pick up that load of lumber from Granger’s and get to work.

The hatless man near the bus depot window stood shoulders hunched and faced away from the others waiting for the bus. They never should have come to Taos, he thought. But they’d heard there might be work. There was. But he and Johnny never should have taken that laborer job. Poor Johnny. He had to flirt with that woman that hired them… and then actually tap it. He’d grinned and said, “In the dark, there’s more of her to grab. And man, she can squeeze that thing tight.” But something about her had bothered him. The way she looked at them. He had slept in the barn, but Johnny was in the farmhouse with her after the first night. The fourth day, yesterday, he had come to breakfast to find that Johnny was gone. She had smiled at him—a big-toothed invitation—and came close enough to brush his shoulder with the largest set of tits he’d ever seen. “Your friend took off… you can sleep in the house tonight.” She had put her hand on his shoulder and given it a crushing pinch. “Come supper time, I’ll pay you your wages,” she waved a five-spot in her other hand.

He had nodded and gone out to the stretch of fence he and Johnny had been mending the day before. They both needed money, and Johnny wouldn’t have run for no reason, but he hadn’t wanted the kind of trouble this woman seemed capable of dishing. He had decided to finish the job and get the Hell away from her, but with that fiver.

At sundown, she had called him to dinner, “Come and get it….” He couldn’t help but hear the emphasis she had put on her call to eat… and to something else.

At the table, he had wiped his plate clean. She had looked from it to him; an up and down run of her eyes. “You eat like a starved man…” she had gotten up from the chair at the end and moved to sit next to him, putting a hand on his forearm. “I do love me a man who has a hunger,” she squeezed and let go to hand him the five-dollar bill. “I’m the hungry kind, too….” She had then—as she got up—leaned forward to drag the tips of her chest across his arm and stood looking toward the room where she’d taken Johnny last time he’d seen him.

He had stuffed the money in his pants pocket, “I left your tools out, gotta go put them away…” the look on her face had hardened into something he’d never seen before on a woman. He had met her glare, managed to work up a smile, and squinted at the darkened entry to her bedroom and back, “I’ll be quick… for some of that dessert.” The smile had come back, and she showed the edges of her teeth behind the curl of lips. “I’ll get it ready,” she had walked to the bedroom as he headed outside.

When he was near the fence line, he had shifted from a walk to a sprint. On the dirt road, he had slowed for the long run to town. He had spent the night hiding in a patch of woods just outside it, walked in at daylight, and waited. The morning bus for Santa Fe was late. He had heard from the newsboy—working the corner, a stack of papers at his feet with ink so fresh the kid’s hands were smeared with it—that a body had been found the day before just off the road near to town. And now a cop was checking people at the depot. Maybe I should tell the police what happened, he thought. Maybe Johnny did run from her but was hurt bad and didn’t make it. But that arrest warrant for him in Los Angeles was waiting to land like a ton of brick. They’d send him away for a long time on that one. Where was that bus?