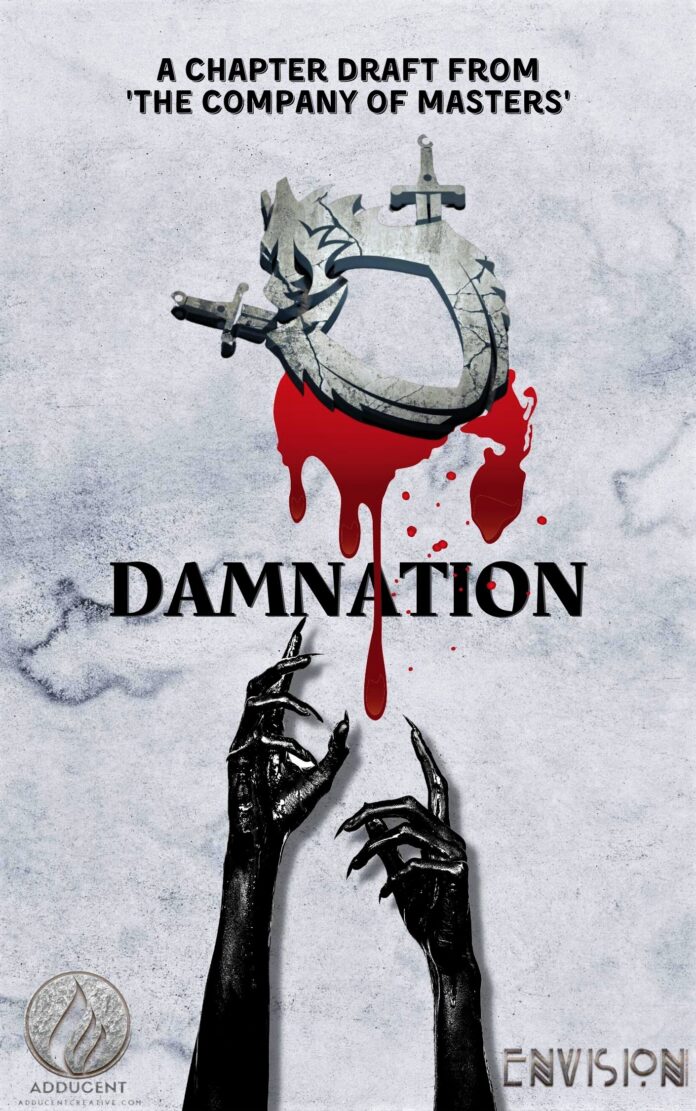 This is an Advance Reader Draft, so not the final version of this chapter. It will be edited and likely refined further during the final pre-publication steps once the manuscript is completed. I hope you enjoy it and find the story interesting or intriguing. Let me know what you think. You can read about the planned trilogy here.

“Shit,” Brandon Thorne grunted when his cell phone rang loud enough to draw glances from the latte, cappuccino, and frappe drinkers at nearby tables and he hit the red button by mistake. He was the odd man out drinking a plain black coffee. A minute later a “Fuck me” came out as he read the text message his sister had just sent. The woman closest to him picked up her coffee and iPad and moved. Understandable. A coarse-looking man, outsized hands, a rough-hewn face, and dark eyes who says shit and fuck two seconds apart with an angry expression might be someone to move away from. Breanna’s message said Andras had been killed. That didn’t upset him as it should. But he did not like Andras at all and for the last few years loved him only a little. In fact, his belief was his twin brother—older by twelve minutes—was an asshole. A real dick. A dickhole; the word he coined when they turned 16. He typed a reply to Breanna: “How?”

“Car accident,” then she followed with, “You need to get here as fast as you can.”

“Because what Andras has dealt with since father’s death will pass to you.”

“Damn it,” he notched his voice down and keyed: “That’s all bullshit.”

“It’s not. You saw how Andras changed after father died.”

“I don’t care.” He wanted to put the phone down, to turn it off but couldn’t.

“You know you do, Brandon. But whether you do or you don’t, what father said is true. What you thought was just family stories about the past… isn’t. It’s now… your present and future.”

He didn’t reply though he knew Breanna never exaggerated and never let go of what she thought was important. She was the only person he had ever trusted. The message alert pinged.

“Be here before what happened to Andras when father died happens to you. Within a day he changed.”

“Let’s say it’s all true, will getting there—to you—stop it?”

“Then what’s the rush,” he paused, “do you need me there to deal with things?”

“You need me. You don’t want to—can’t—go through it alone.”

He didn’t think it possible but in a matter of minutes his life had become even more screwed up.

“Shit,” Brandon thumbed the Kayak travel search engine app on his phone, tapped to login and then keyed in flights to San Francisco. Good luck with flying last minute and getting a cab or Lyft driver Midtown East on New Year’s Day morning. With a second but not the last “fuck me” of the day, this one under his breath, he headed to the street to find a ride to Newark, LaGuardia or JFK, whichever with a flight he could grab in time. This first morning of the new year wasn’t helping his resolution to stop cursing or at least tone it down. Paula, his boss, gave him the stink eye when his mouth cut loose; one reason she disliked him. Not that it mattered. In return, he didn’t like her. At least he had another week of vacation and didn’t have to call and tell her he needed more time off to deal with this, especially since he had told everyone he had no living family. Almost true, now only me and Breanna left. He opened the message thread: “Okay, Bree I’m coming to you.” Credit cards maxed out; he used his rent money to pay for the only affordable flight. Eviction was the least of his worries at the moment. Happy fucking birthday. I moved 2,900 miles to get away from my crazy-weird fucking family, and now I have to go back to what I’d left long behind.

Brandon checked his watch, just past midnight—for him—came with wheels touching down on the runway. As he deplaned at SFO, Brandon knew how bad he looked… and felt even worse. At least I’m not swearing any more… not aloud. They sure frown on that at airport security checkpoints and TSA lines… and on airplanes; odd-looking guys, tense, sweaty, cursing and talking to themselves. At least all that standing, sitting and waiting had given him time to reconcile what happened and what Bree believed would happen next.

Warmer than New York, he sweated in layers as he passed baggage claim to exit the airport toward the cab queue and from there to find the pink and white sign for the Lyft customer pickup zone. All he had was what he wore—now going on eighteen hours—and carried. A heavy coat draped over his arm and shoulder bag with his laptop and research notebooks for a story he planned to write. As he hitched the bag higher on his shoulder, he got a good whiff of himself and hoped the driver could handle the unique reek of a no longer deodorized traveler. If they worked SFO often, they surely must.

Brandon sat in his brother’s apartment on a couch covered with boxes and documents. They contained everything passed on to his brother about the family legacy. It was now his. He held a leather binder, four-inches thick, with each page full of text, diagrams and sketches, front and back. Brandon hadn’t seen it in eighteen years. That was on December 31, 2000, his brother’s twelfth birthday. His was the next day.

His father—that day—held the sheaf of papers in the binder in Brandon’s hands now. Behind closed eyes, he still saw his father’s desk. On it, sitting next to the humidor for the cigars he endlessly smoked was an old metal-hasp journal with the worn leather cracked and scored in places. The sunset beams shafting through the windows behind the desk caught it just right, and the cover and edges of some pages showed a deep scarlet stain that wasn’t from the setting sun.

“This,” his father said that day brandishing the thick stack of paper in his one large scarred hand, “is that,” he pointed at the old diary the family always referred to as one of the Draenen logbooks. “Typed out and clear of the blots and stains of your ancestor’s blood and tears.” He put it down on the desk and moved to the brace of windows and looked out. His bulk blocked the sun’s rays and cast a long shadow over him and Andras as they sat wondering what it all meant.

Father had turned his back to the window, and as he did the scar that cleaved the left side of his face caught the sun, and he wondered again how his father received such a wound. He studied them as twilight grew behind him. “I have to tell you who and what we are,” he was talking to both of them but looked at Andras. “And,” his eyes glistened, “about what passes to the next in line when I die.”

Until that moment on his dead twin’s couch, Brandon had seen the journal… the logbook, only one other time. Andras though studied it daily with their father. Brandon had seen how his brother changed, not just physically but also how fixated Andras became on the family legacy. Now reading through the logbook, he realized what his father told them was straight from its pages. And what he had not told him was much, much worse than anything ever imagined. He blinked the memory away and flipped the binder open to re-read the first entry:

‘A biting wind sweeps through where I sit, and a guttering candle spits wax on my sleeve and these pages as I write. God has damned me for finding that witch woman. She died in my arms believing I killed her and, in her confusion, blamed me with her last breath. My first child, a son, was born this first of January, the year of our Lord 1562. Will he be cursed as I am?’

That’s when and where it started. That year in Wales, in Merionethshire near Caerdeon, on a cliff overlooking the river Afon Mawddach where it emptied into Barmouth Bay. Father had told him and Andras, where their grandfather came from was a cruel place and cold people lived there. Brandon had never heard of it so didn’t know, but his grandfather and father had been taciturn men who let no one close to them. He thought, not even his mother, though, that’s another story and not for me to tell since she died in childbirth. Mine, after Andras’s, had gone all wrong.

Brandon looked at his sister, Breanna, adopted right after his twelfth birthday. But she was a real sister just the same. He wondered, for the countless time, why father nicknamed her ‘Brownie.’ She would never comment about it. Unlike his family’s dark hair and eyes, Breanna’s almost white hair caught any light and shimmered, limned in silver at dusk and even more so at night. Her deep-set ruby eyes darkened or lightened with her mood; they too gleamed with a light of their own.

“Why didn’t you and Andras stay at dad’s house? I know he left the property at Twin Rocks to him.”

“You and Andras had more in common than you think.”

“Right,” Brandon scoffed. “We might have been born twins, but that bond ended when we turned 12.”

“He didn’t enjoy living in the middle of nowhere any better than you.”

But he knew she liked being alone and wondered what had prompted her to move here with Andras. He shook his head, “Why couldn’t this die,” he turned the binder in his hands then set it on the table, “with Andras?” The glance she gave the binder and then the steady look into his eyes was the only response she would—or could—give. And he knew why. What his father told them had proved true with Andras.

He looked at his watch. Three minutes left, and he was scared shitless. “Okay, I’m ready,” he lied.

Breanna put a hand on his arm and smiled, “Bran, I’ll watch over you.” She canted her head and leaned toward him. Her pallid face caught the light from the table lamp, eyes and hair glinted, “You’ll be fine.” They had talked about what he should expect, but she still knew far more than she told him. And that was for his protection until he was ready.

“I hope you’re right,” he said as he stretched out on the couch. But nothing would be fine, ever. From what he’d scanned in the logbook… it never had for any of this family though his grandfather and father tried. He was fucked.

Breanna watched as the change took her brother. She hadn’t told him Andras had died at 12:07 AM. The exact time when Bran turned 30… and that it had been preordained.