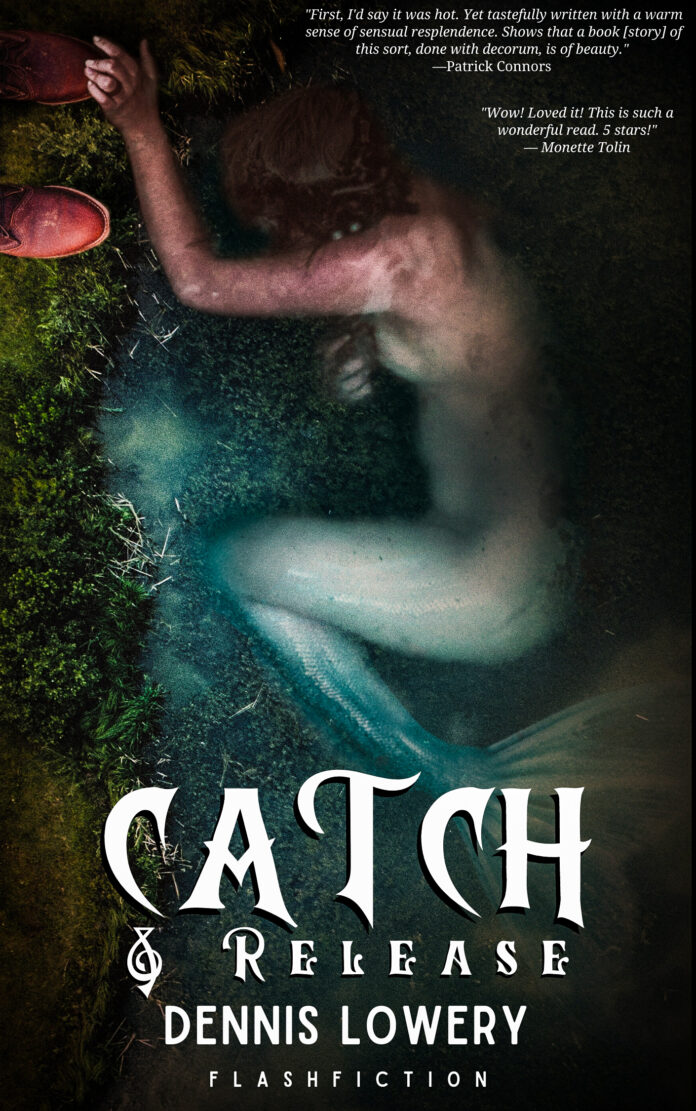 “First, I’d say it was hot. Yet it is tastefully written with a warm sense of sensual resplendency. Shows that a book [story] of this sort, done with decorum, is of beauty.” –Patrick Connors, about CATCH & Release

“Wow! Loved it! This is such a wonderful read. 5 stars!” :D— Monette Tolin

“This is lovely.” –Dawn Hart Jackson

“Enjoyed your story and sentiment a lot.” –Michael Koontz

He knew she loved him, but loved the sea more. He watched as she touched the bracelet on her left forearm, what she called her ‘heart-arm.’ The wide cuff—its oval of blue-shaded ivory mounted atop the metal—depicted a mermaid resting on surf-pounded rocks admiring a jewel held in her hand. The shape of metal shells, moonstones aglow, and other faceted stones formed the frame for the lovely sea-maiden. She had told him it was a ‘father-gift’ received at her coming of age.

Holding her elbow, he felt the tremor, a racing of goosebumps that prickled her flesh at the touch of saltwater as they waded past knee-deep. His arm now around her waist, he felt her breathe, rib cage expanding and arms extending to hug the horizon. Water as far as he could see. As a sailor, he’d crossed that ocean six times, knew its allure and wondered at the beauty in the deeps he’d never see. Each night he’d seen the shadow of knowing what he did not it in her eyes, as she studied the moonbeam-lit movement of water during their walks on the beach. The shimmering orbs on her bracelet contained their own pale lunar light, a luster that grew when she touched them with a saltwater dampened finger. She had never asked, but her emanation of never-ending longing told him he must let her go.

It was time. The glance over her shoulder at him with a trembling smile and questioning look forced him to smile back and nod though it broke his heart. Chin thrust out toward the sea and arms heavy as he withdrew them from her, he already missed the warm satin texture of her firm, tanned torso, and the press of pink-coral-tipped breasts against his chest. She turned to kiss him with a soft touch of salt-rimed lips. A bittersweet taste.

As she transformed, the lovely legs she had never gotten used to scaled and fused to end in the broad fan that would now push her through the waves. She sank into the water and was gone.

He backed his way to the beach eyes kept seaward scanning and hoping. She broached one last time, her back to the incoming waves, as he stood with seafoam washing over his feet. The arc of her muscular back, arms crossed over still human breasts… the thrust of neck, head pitching back, long, dark-henna hair cascading behind her. The feathered crest of breaking waves framed her as she surfaced in a spray of moonlight caught drops. She was free and what was love but being able to give her that. He swallowed and wiped wetness of his own from black-stubbled cheeks.

She pushed off into the trough and was soon out of sight. He waited at the breakers edge until the moon set and night became the darkness that seemed endless until dawn. While she was with him, they had loved with the certainty and power of the tide. His heart had followed the rhythm of hers and he knew it would never beat the same way again.

As the sun rose behind him, he trudged through the sand to the wooden steps leading to the boardwalk. He passed two men, not locals judging by the newness of rods and the amount of tackle for surf fishing, and with a qualm, he prayed she was far from the shore by now. But he knew she must be and now danced among coral reefs and rode the currents that caressed the shoals of this length of land as they swirled and became one with the Gulf Stream.

He nodded and kept moving. Though close to home, it would be the longest walk he’d ever taken.

He had not slept in two days and walked the beach at night. Near the jetties, he saw something roil the surface just off the channel mouth. Dolphin, he thought. Then he heard laughter coming over the water. He climbed over a slippery jumble of stone, following the sound to the edge. And there she was. Her eyes trapped the moon and seemed almost as large. Drops of water glinted on her breasts as they fell and rose. She raised herself, and he watched as legs re-formed. He felt his breathing synchronize with hers as she took him in her arms. “I’ve searched for you,” he lifted and carried her over the rocks to a stretch of sand not far away.

She brushed the hair from his eyes, her fingers following the line of his cheek and jaw to rest a finger on his chin. “I brought you something,” she reached into the pouch at her side.

A cuff bracelet, similar to the one she wore but simpler. Its burnished dark red metal gleamed in the moonlight. She slipped it over his wrist, hand stroking his arm, leaving a tingling sensation behind. He looked down and saw the engraving etched in the thick metal and filled with mother-of-pearl that pulsed in an iridescent tidal rhythm. The question was in his eyes. “It’s the Heart of the Sea,” she explained and took his other hand and placed it over her heart. “It is a life-partner bond.” On their arms, the bracelets shone with a ripple of red umber luminescence from deep within the metal that steadied and found its pattern following the murmur of surf and their heartbeat.

Her eyes glistened but not from the runnels of seawater trickling from the foamy thickness of her hair down her face as she looked up at him. Those lips that tasted of ocean deeps told him though she loved the sea, she’d come to him every night on the tide. And he would no longer be alone.